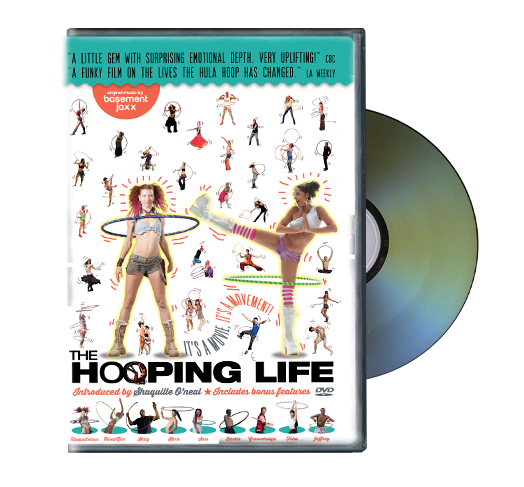 Get THE HOOPING LIFE on DVD!

THE HOOPING LIFE is the first film that captures the origins and rise of modern day hula-hooping – a.k.a hooping. With an introduction by hooper (of basketball and hula alike) Shaquille O’Neal, the film illuminates eight extraordinary stories of hoop devotees who have embraced it as an art form, a teaching aid, and an instrument of redemption.

From the streets to intimate clubs, to giant arenas, the film alternates between self-filmed video diaries, verité documentary footage, and spectacularly filmed performances. Filmed over six years and with an appearance by late hoop-promoter and TV personality Art Linkletter, the film celebrates the healing power of movement and the spirit of human inventiveness.

British electronic duo BASEMENT JAXX provides the buoyant score that captures the free-spirited nature of hooping, with additional music by The Scissor Sisters and an appearance by popular jam-band The String Cheese Incident.

- Region 0 Format (Playable in ALL Regions)

- Hoop Stories Gallery, Behind The Scenes, How To Make Your Own Hoop, Production Stills, Trailers, How To Hoop, Hoop Moves Gallery

Whether you’re a hooper, hoop-curious or totally new to hooping, The Hooping Life is a movie that makes you move.

Sorry, but we do not have the woman power to take refunds or cancelations

See it in your library

View in Library
Sorry, this item is not available in your location.
Sold out, please go back and pick another option.

Your purchase was successful!

We charged your card and sent you a receipt

Good news! Since you already have a Gumroad account, it's also been added to your library.